Cardiologists’ salaries depend on a variety of factors, including geographical location, employer type, work setting, area of specialty, and years of work experience.

The average salary for cardiologists employed in the United States is $210,019 a year including bonus earnings according to Payscale’s salary data. The median salary for this occupation varies depending on a wide range of factors, from location and employer type to hospital setting and field of specialization. 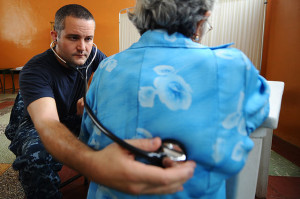 Employment setting is one of the major factors that can affect a cardiology doctor’s annual pay. Cardiologists employed in general hospitals report annual earnings in the range from $51,521 to $412,072 a year, those working in physicians’ offices or private practices make between $98,389 and $440,421 a year, and professionals working in ambulatory care or surgery centers earn salaries in the range between $75,050 and $280,000 a year according to Payscale.

In terms of employer type, cardiology doctors working at hospitals generally earn from $49,276 to $357,959 a year, those employed by private practices make between $97,871 and $446,982 a year, and professionals working for companies are paid between $78,611 and $178,039 annually. Cardiologists employed by colleges and universities typically have salaries in the range between $98,264 and $264,515 a year according to Payscale’s salary data.

The starting salaries for cardiologists typically range from $180,000 to $250,000 a year according to HealthcareSalaries.com. With five years of experience, the average salaries increase to between $300,000 and $400,000 a year. The starting salary for this occupation will largely depend on employer type, industry, academic background, and location.

The American Medical Group Association (AMGA) reports that the median starting salary for the profession is around $292,000 a year.

Cardiologists’ salaries can vary greatly from city to city, too. For example, cardiology doctors employed in New York typically earn between $50,684 and $399,281 a year, while those based in Los Angeles have salaries in the range from $35,050 to $112,500 a year according to salary information provided by Payscale.

Cardiologists earn around $105.66 per hour on average according to HealthcareSalaries.com. The top 10 percent are offered an hourly rate of around $200, while the lower 10 percent earn $70 per hour. The average hourly rate for this occupation depends on a number of factors, from professional experience, employment situation, and work setting to employer type and location.