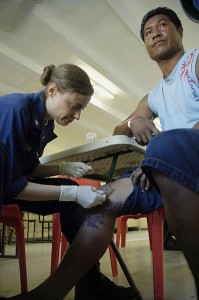 Dermatologists who work at physicians’ offices and private practices typically earn between $116,350 and $362,763 a year, while those employed at general hospitals report earnings in the range from $122,829 to $406,946 annually.

Professionals working at dermatologists’ offices generally earn from $76,596 to $451,071 a year, while those employed at medical offices are paid between $83,424 and $270,225 a year. General salaries for dermatologists working in the healthcare industry typically range from $121,198 to $461,628 a year according to Payscale.

The median salary for the profession, as reported in the 2013 Dermatologist Compensation Report released by Medscape, is $306,000 a year, with men earning $321,000 a year on average, and women being paid an average salary of $284,000 a year.

The average starting salaries for dermatologists with less than a year of experience range from $76,302 to $260,398 a year according to Payscale. These professionals report getting $1,000 a year in bonuses.

The median starting salary for dermatologists following a year of residency or subspeciality training was $280,000 a year in 2010 according to the Medical Group Management Association.

Various benefits packages can reflect a dermatologist’s annual earnings. Dermatology doctors who get 401(k) plans typically have an annual pay in the range from $89,396 to $402,683, those who get malpractice or liability insurance generally earn between $125,838 and $495,518 a year, professionals who get life or disability insurance make between $76,026 and $502,586 a year, those who get paid holidays and vacations are paid between $77,281 and $479,942 annually, and dermatologists who get paid sick leave as part of their benefits package typically have salaries in the range between $152,700 and $325,000 a year according to Payscale’s salary data.

The average hourly rate for dermatologists with 5 to 9 years of experience ranges from $34.39 to $203.47 according to salary data provided by Payscale.

New York based dermatologists have salaries in the range from $177,857 to $305,209 a year according to data provided by Payscale.

Employer type is one of the factors that can affect a dermatology doctor’s annual salary. Dermatologists employed by private practices generally earn salaries in the range between $95,000 and $447,964 a year, those working at hospitals are paid between $68,510 and $357,450 annually, and professionals employed by companies report salaries in the range from $20,426 to $469,783 a year according to Payscale’s salary information.

Employer size is another factor that can affect a dermatologist’s salary. For instance, professionals whose organization employs 1 to 9 people typically earn between $120,805 and $441,022 a year, while those working for an organization that has 10 to 49 employees have salaries in the range from $200,000 to $491,318 a year according to information from Payscale.