Men generally earn more than women: male neonatal specialists report earnings in the range from $116,923 to $312,480 a year, while female neonatologists report being paid between $100,671 and $307,921 annually according to Payscale.

The average annual salary for neonatologists employed in the United States is $275,400 according to the recruitment firm Profiles, $205,236 according to Payscale, $222,743 according to Salary.com, and $204,417 according to Jobstat.

The best paid neonatal doctors earn $303,260 annually, while those with the lowest yearly income make about $138,581.

The salary information on Salary.com reveals that the top 10% of neonatal specialists earn $309,949 or more annually, while those on the lower end of the scale make $156,077 a year or less. 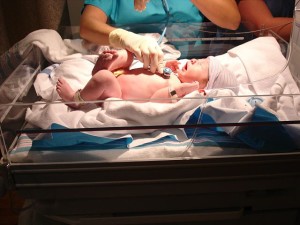 Neonatal physicians employed by organizations with 10 to 49 employees typically earn an annual pay in the range between $189,649 and $218,733. Professionals with a certification from the American Board of Pediatrics (ABP) make between $122,554 and $302,919 annually, and those with a certification in Neonatal-Perinatal Medicine from the American Board of Pediatrics earn salaries in the range from $165,000 to $221,695 a year according to Payscale’s income statistics.

The starting salary for neonatologists in their first year on the job is $196,000 a year according to ProfilesDatabase.com. These professionals get $2,510 a year on average in bonuses according to Payscale’s salary data.

Neonatologists’ salaries also vary from state to state. Professionals employed in Florida, for example, typically earn between $176,874 and $307,392 a year, and those based in Texas generally report earning annual salaries in the range from $162,699 to $209,609. Neonatal physicians working in New York make between $147,395 and $238,917 annually, and those employed in California are typically paid between $100,671 and $397,317 a year according to Payscale’s salary figures.

The average hourly wage for neonatal physicians working in the U.S. is $101.65. The best paid neonatologists earn $150.80 per hour, and those with the lowest salaries make $68.91 per hour on average.

Neonatologists’ benefits packages can sometimes reflect their average annual pay. Professionals who get 401(k) plans typically report salaries in the range from $135,741 to $307,270 a year, those who get malpractice and liability insurance generally earn between $118,588 and $263,555 annually, and neonatal specialists who get life and disability insurance are usually paid between $135,000 and $285,000 a year.

Experienced neonatologists with 20 or more years of experience under their belt are paid $40,000 a year on average in bonus money according to the salary information provided by Payscale.

Yearly bonuses will depend on the employer, too. For example, neonatologists employed by MEDNAX report getting $19,500 a year on average, while those employed by the Pediatrix Medical Group are paid around $15,000 a year in bonuses according to Payscale.

Neonatologists’ annual bonus earnings also vary from state to state. Professionals employed in California get $60,000 a year on average, those working in West Virginia are paid about $16,250 a year, and neonatology doctors based in Texas report getting $12,000 a year on average. Professionals working in New York earn around $10,000 a year in bonuses, those based in Florida get $2,750 on average, and neonatology specialists employed in Massachusetts are paid around $1,750 a year in bonuses according to Payscale’s salary statistics.

Neonatologists’ annual salaries also vary depending on employer type. Professionals employed by hospitals typically earn between $123,648 and $302,588 annually, and those working at universities and colleges report an annual income in the range from $147,395 to $187,000. Neonatal doctors employed by private practices and firms are typically paid between $193,550 and $228,907 a year, and those employed by companies generally make between $197,151 and $254,341 a year according to Payscale’s salary figures.

Neonatologist salaries can also be affected by the number of hospital beds. For example, professionals working for institutions with less than 50 hospital beds typically report salaries in the range from $147,000 to $275,000 a year, while those employed by institutions with 50 to 99 beds are generally paid between $124,800 and $236,500 a year according to Payscale’s salary data.