Based on the BLS income statistics, the top paying industries for gynecologists are offices of physicians, where these professionals earn an average yearly salary of $223,070, followed by outpatient care centers, where the median annual salary for this occupation is $214,830, and local government, where the average salary for gynecologists is $206,740 a year. Gynecologists working in other ambulatory health care services earn a median annual salary of $202,360, and those employed at general medical and surgical hospitals are paid around $199,140 a year. Gynecologists employed by universities, colleges, and professional schools earn $113,440 a year on average according to the salary figures provided by the BLS.

The average salary can also vary depending on geographical location. Gynecologists employed in California earn $220,940 a year on average, those working in Texas are paid around $219,870 annually, and professionals based in Ohio earn an average annual salary of $208,620. Gynecology physicians working in New Jersey are paid $223,250 a year on average, and those based in North Carolina earn a median yearly salary of $200,400.

The top paying states for gynecologists, as reported by the BLS, are Idaho, Oklahoma, Pennsylvania, South Dakota, and Montana.

The salary range for gynaecologists depends on a wide range of factors, including years of professional experience. Gynecologists with 1 to 4 years of experience typically earn salaries in the range from $53,561 to $399,315 a year, and those with 5 to 9 years of experience are generally paid between $125,000 and $275,000 annually.

In terms of industry, gynecologists working in the health care sector typically report a yearly income in the range from $60,402 to $405,264, and those employed at obstetricians’ or gynecologists’ offices are generally paid between $70,000 and $242,975 a year according to Payscale’s salary figures.

Men report significantly higher salaries than women: male gynecologists typically earn between $171,961 and $254,857 a year, while female gynecology doctors are generally paid an income in the range from $61,042 to $201,683 annually according to Payscale.

In terms of employer type, gynaecologists working at hospitals generally earn between $53,773 and $243,206 a year, while those employed by private practices and firms typically report an annual pay in the range from $69,043 to $405,264.

Professionals with the degree of Doctor of Medicine (MD) usually earn salaries in the range between $53,345 and $253,182 a year.

The average starting salary for gynecologists in their first year on the job is $210,000 a year according to the recruitment firm Profiles.

Gynecologists working in the U.S. earn $104.21 per hour on average according to the salary figures provided by the Bureau of Labor Statistics (BLS). 10% of gynecologists earn $58.29 per hour or less, and 25% are offered an hourly wage of up to $79.73. 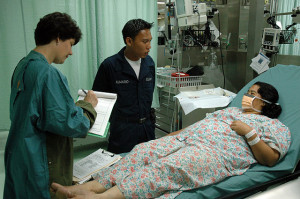 The hourly wage for gynecologists depends on a variety of factors, including industry. Professionals working at physicians’ offices earn $107.25 per hour on average, those employed at outpatient care centers are paid around $103.28 per hour, and gynecologists working for the local government earn an average hourly wage of $99.39. Gynecology doctors working in other ambulatory health care services make $97.29 per hour on average, and those employed at general medical and surgical hospitals are paid around $95.74 per hour. Gynecologists employed by universities, colleges, and professional schools earn a median hourly pay of $54.54 according to the BLS salary data.

Along with the basic salary and yearly bonuses, gynecologists also typically get a variety of perks and benefits, and these can sometimes reflect their annual income. For example gynecology specialists who have 401(k) plans generally report salaries in the range from $68,047 to $203,473 a year, those who get malpractice and liability insurance as part of their benefits package are usually paid between $196,527 and $258,063 a year, and professionals who get paid vacations and holidays typically earn between $164,500 and $250,000 a year according to the salary information provided by Payscale.

The yearly bonuses can vary from state to state. Gynecology doctors working in New York report being paid around $1,000 a year, those working in California get $5,750 on average, and professionals employed in Texas are paid $500 a year in bonuses.

Bonuses can vary dramatically from city to city. For example, gynecologists employed in New York report getting $70,500 a year on average, while those based in Los Angeles are paid around $5,750 a year in bonuses.

Professional certification can also affect the bonuses for these professionals. For instance, those with the qualification of Certified Doctor (SORSI) report getting $6,000 a year in bonus money, while professionals with a certification from the American Board of Obstetrics Gynecology (ABOG) receive around $500 a year according to Payscale.

Hospital setting is another factor that can affect bonus earnings. Gynecologists working at general hospitals typically get around $10,000 a year, those employed at physicians’ offices and private practices are paid $1,000 a year on average, and professionals working in ambulatory care and surgery centers get $4,000 a year on average in bonus money.

Salaries for these professionals also depend on hospital setting. Gynecology physicians working at physicians’ offices and private practices report annual earnings in the range from $61,277 to $254,281, and those employed at general hospitals are usually paid between $154,000 and $250,000 a year.