Child psychiatrists employed in the United States typically earn salaries in the range from $102,848 to $279,315 a year including bonuses according to the salary information reported by Payscale.

The basic annual salary for child psychiatrists is generally in the range from $97,290 to $249,114, and the yearly bonuses can amount to up to $24,361 according to Payscale’s salary data. Based on the salary figures reported by ValueMD.com, the top salaries for child and adolescent psychiatrists can reach $265,000 a year.

The average starting salary for child psychiatrists in their first year on the job is $159,000 a year according to the salary figures reported by the recruitment agency Profiles. Based on the salary data provided by ValueMD.com, child and adolescent psychiatrists earn $158,000 a year in the first two years of practice.

Based on the salary data reported by Payscale, child psychiatrists with less than a year of work experience typically earn salaries in the range from $144,416 to $172,500 a year. 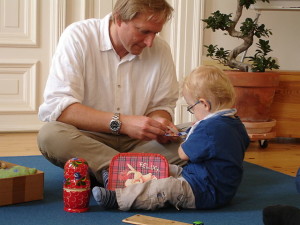 Child psychiatrists who have a certification from the American Board of Psychiatry and Neurology (ABPN) generally report earning salaries in the range from $86,417 to $255,050 a year.

Child psychiatrists’ salaries depend on geographical location and can vary considerably from state to state. Based on Payscale’s salary data, child psychiatrists employed in California typically earn salaries in the range from $103,042 to $387,832 a year, those working in Pennsylvania are generally paid between $99,949 annually, and professionals based in Illinois make between $60,000 and $220,000 a year.

Based on Payscale’s salary data, child psychiatrists with 20 or more years of work experience can expect to earn an hourly salary in the range from $99.10 and $154.18. Professionals with a certification from the American Board of Psychiatry and Neurology (ABPN) generally earn between $85.57 and $208.59 per hour.

Child psychiatrists working in the health care sector typically earn an hourly pay in the range from $101.74 to $199.98, and those working at psychiatrists’ offices earn between $109.50 and $200 per hour according to Payscale’s salary figures.

Along with their basic annual salary and yearly bonus earnings, child psychiatrists also typically get a wide range of benefits and perks, and these can sometimes reflect their annual pay. Psychiatrists who have malpractice and liability insurance generally report earning salaries in the range from $97,444 to $241,739 a year, those who have paid vacations and holidays are typically paid between $135,741 and $235,153 annually, and professionals who have 401(k) plans usually make between $137,705 and $259,273 a year.

The most popular perks and benefits among child psychiatrists, as reported by Payscale, are malpractice and liability insurance, paid vacations, 401(k) plans, life and disability insurance, and paid sick leave.

Child psychiatrists’ annual salaries can vary significantly from industry to industry. Psychiatrists working in the health care sector are typically paid between $59,180 and $248,050 a year, those employed at hospitals generally earn between $138,581 and $246,581 annually, and professionals working at psychiatrists’ offices make between $50,684 and $343,241 a year. Child psychiatrists employed at community mental health centers make between $80,537 and $247,119 a year, and those working at psychiatric hospitals are generally paid an income in the range from $162,135 to $212,629 a year. Professionals working at medical offices earn an annual pay in the range between $137,497 and $245,735, and those employed at health clinics are typically paid a yearly income in the range from $186,500 to $256,411 according to the salary data provided by Payscale.