Pediatricians typically earn between $86,559 and $203,257 a year according to Payscale. Pediatric doctors employed by Kaiser Permanente generally have salaries in the range from 118,500 to $176,500 a year. Along with their annual income, pediatricians can also get extra earnings from profit sharing.

Pediatricians’ salaries can also vary depending on hospital setting. Doctors who work at physicians’ offices typically make between $79,096 and $177,480 a year, those employed at general hospitals earn between $48,479 and $203,099 a year, pediatricians working in ambulatory care or surgery centers are generally paid between $50,335 and $171,342 a year, while those working in community and home health report salaries in the range from $121,740 to $163,664 a year. 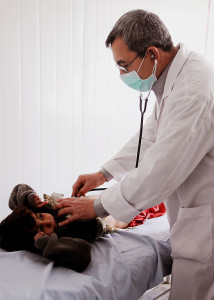 The median salary for pediatricians working in the United States is $137,868 a year according to Payscale.

The Bureau of Labor Statistics (BLS) reports that pediatricians employed at physicians’ offices earn $173,070 a year on average, those working at general medical and surgical hospitals make around $149,380 a year, pediatric doctors employed in outpatient care centers earn around $175,700 a year, and those working in specialty hospitals (with the exception of psychiatric and substance abuse hospitals) earn $169,770 a year on average. Pediatricians employed by colleges, universities, and professional schools, on the other hand, are paid an average salary of $105,210 annually.

The starting salary for pediatricians with less than a year of relevant work experience ranges from $53,355 to $152,247 a year according to the salary information provided by Payscale.

The Bureau of Labor Statistics (BLS) reports that pediatric doctors employed in physicians’ offices earn $83.21 per hour on average, those working at general medical and surgical hospitals make $71.82 per hour, doctors employed in outpatient care centers are offered an average hourly wage of $84.47, and those working at specialty hospitals earn around $81.62 per hour. Pediatricians employed by universities, professional schools and colleges earn $81.62 per hour on average.

Pediatricians typically get good benefits packages along with the annual salary, and benefits can also reflect their yearly earnings. Pediatric doctors who get malpractice and liability insurance typically earn between $91,590 and $190,981 a year, those who get 401(k) plans earn between $90,910 and $187,156 a year, professionals who get paid holidays and vacations generally have salaries in the range from $81,543 and $184,227 a year, and those who get life or disability insurance earn from $88,769 to $204,870 a year.

Pediatricians’ annual salaries can vary depending on their professional certification. For example, pediatric doctors who have the certificate from the American Board of Pediatrics (ABP) generally earn between $96,519 and $189,920 a year, those with qualifications from Pediatric Advanced Life Support (PALS) make between $98,780 and $186,161 a year, pediatricians who have obtained the Board Certified Primary Care certificate are generally paid between $98,230 and $177,642 annually, and those with the qualification of Certified Doctor (SORSI) report salaries in the range from $120,000 to $210,000 a year.