Optometrists are one of the best paid professions in the United States. The median yearly pay for this occupation in 2012 was $105,000, with the best paid optometrists paid $149,000 annually.

Optometrist salaries depend on a wide range of factors, from work experience and geographical location to industry and employer type. Optometrists working at general hospitals typically earn between $95,461 and $135,000 a year, while those employed at physicians’ offices and private practices report an annual income in the range from $60,402 to $158,927 according to salary data provided by Payscale.

The average salary for optometrists working in the United States is $97,820 a year according to the Bureau of Labor Statistics.

Professionals working at health and personal care stores earn $101,560 a year on average, and the median annual wage for those employed by universities, colleges, and professional schools is $79,740.

The states with the highest employment level for this profession are California, New York, Texas, Illinois, and Florida. California based optometrists earn $102,330 a year on average, those employed in New York make about $117,690 a year, and professionals working in Texas are paid around $95,810 annually. Optometrists living in Illinois earn $108,590 a year, and those based in Florida make $128,890 a year on average according to the BLS.

The median salary for optometrists employed in the United States is $98,806 a year including bonuses according to Payscale. These professionals earn bonuses in the average amount of $1,000 a year. Earnings from profit sharing can also depend on years of professional experience. 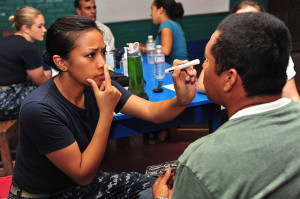 The starting salary for optometrists with less than a year of experience typically ranges from $57,810 to $102,129 a year according to Payscale. These professionals earn bonuses in the average amount of $500 per year.

The hourly rate for professionals with less than a year of experience is between $39.09 and $54.38.

Benefits packages can reflect the average salary range for optometrists. Professionals who get 401(k) plans typically have salaries in the range from $74,728 to $139,657 a year, those who get malpractice or liability insurance generally earn between $69,382 and $133,702 annually, and optometrists who get education, training, certification, or tuition reimbursement report an annual income in the range from $66,384 to $137,244. Optometrists who get life or disability insurance earn between $57,192 and $137,982 a year, those who get paid sick leave earn from $73,404 to $137,885 a year, and professionals who get paid holidays and vacations as part of their benefits package are paid between $72,058 and $126,340 a year.

The most popular benefits among optometrists are 401(k) plans, malpractice and liability insurance, paid holidays, and paid sick leave.

The median hourly wage for optometrists is $47.03 according to the Bureau of Labor Statistics (BLS).

Professionals employed at physicians’ offices make $61.24 per hour on average, those working at offices of other health practitioners earn around $51.85 per hour, and optometrists working at outpatient care centers make $54.55 per hour. The mean wage for professionals employed at health and personal care stores is $48.83 per hour, while those working at colleges, universities, and professional schools typically earn around $38.34 per hour.

Optometrists employed in the United States typically have salaries in the range from $68,098 to $137,069 a year according to Payscale. Self-employed optometrists generally earn between $75,000 and $168,000 a year.

Optometrist salaries also vary depending on field of specialty. Optometrists specializing in optometry typically earn between $62,733 and $135,326 a year, while those specializing in pediatrics are paid between $49,665 and $100,687 annually. Professionals with the qualification of Certified Doctor (SORSI) have salaries in the range from $67,515 to $146,256 a year according to Payscale.

The most popular areas of specialty among optometrists are optometry, pediatrics, clinical research, and health and wellness.