Radiologists are one of the best paid medical specialties, ranking third in Medscape’s 2013 salary survey, after orthopedists and cardiologists. In 2012, 3% of radiologists reported a salary increase by more than 10%, and 12% saw an increase of up to 10%.

43% of the radiology physicians included in the survey reported that their annual salary remained the same from the previous year. 18% of them reported a decrease by as much as 10%, and 24% saw their salaries decrease by more than 10%.

The average annual salary for radiologists employed in the United States is $325,438 according to the American Association of Medical Colleges, $373,593 according to Salary.com, $349,000 according to Medscape’s 2013 salary report, and $252,020 according to Payscale.

Medscape’s salary statistics reveal that men earn $360,000 a year on average, while women earn a median annual pay of $309,000.
Radiologists’ average salary varies from region to region. The best paid radiologists are based in the Southwest region, where the median annual salary for the profession is $407,000, followed by radiologists employed in the South Central region, who earn $383,000 a year on average, and those working in the Southeast, where the average salary for this occupation is $374,000 a year.

Radiologists employed in the Great Lakes region make $355,000 a year on average, those based in the West are paid around $346,000 annually, and professionals working in the Northwest earn an average yearly salary of $336,000. Radiologists working in the Mid-Atlantic region make $335,000 a year on average, and those based in the North East are paid around $319,000 a year. The lowest salaries are in the North Central region, where the median salary for the profession is $313,000 a year according to Medscape’s report.

Work situation is another factor that affects a radiologist’s salary. Professionals who are partners in their organizations earn $413,000 a year on average, and those working as independent contractors report an average yearly salary of $334,000. Radiologists who are employees in their organization make $297,000 annually on average, and those who are owners of solo practices have a median annual salary of $310,000.

Radiologists employed in the United States typically earn salaries in the range from $98,276 to $402,400 a year including bonuses and profit sharing according to Payscale.

The starting salary for radiologists with less than a year of professional experience is typically in the range between $40,547 and $353,549 a year including bonuses according to salary data provided by Payscale.

Radiologists’ annual salaries can be reflected in their benefits packages. Professionals who get private medical insurance (PMI) as part of their package report earnings in the range from $153,955 to $484,790, those who get 401(k) plans earn between $102,838 and $404,253, and radiology doctors who have malpractice or liability insurance are generally paid between $103,042 and $408,260 annually. 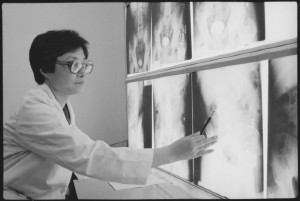 Radiologists with 10 to 19 years of experience typically earn between $85.50 and $190 per hour according to the salary information provided by Payscale. Professionals with a certification from the American Board of Radiology (ABR) report being offered an hourly rate in the range from $65.44 to $202.73. Radiologists with the degree of Doctor of Medicine (MD) are generally paid between $83.52 and $178.06 per hour.

Radiologists’ annual salaries can vary significantly depending on their area of specialty. Radiologists specializing in interventional radiology typically earn between $110,000 and $450,000 a year, and those specializing in general radiology report annual earnings in the range from $80,000 to $400,000. Radiology physicians whose expertise lies in Magnetic Resonance Imaging (MRI) are generally paid between $225,200 and $325,000 annually, and those specializing in Computed Tomography (CT) earn between $200,200 and $362,500 a year according to Payscale’s salary data.

Radiologists’ salaries can also vary depending on hospital setting. Professionals working at general hospitals typically earn between $95,622 and $360,064 a year, those employed by private practices or physicians’ offices are paid between $101,014 and $392,543 annually, and radiologists working in ambulatory care or surgery centers report annual earnings in the range from $176,874 to $366,340 according to Payscale. Radiologists working in other settings typically earn between $319,356 and $411,157 a year.