Toxicologists employed in the United States generally earn salaries in the range from $50,325 to $116,528 a year including bonuses, which can amount to up to $10,279 a year according to the salary information reported by Payscale.

The basic annual salary for toxicology doctors is typically in the range between $52,261 and $115,612 according to Payscale. Jobstat reports that the highest annual salary recorded for this occupation is $114,900 and the lowest, $50,810 a year.

Toxicologist salaries vary depending on a number of factors. Work experience is one of the major ones. Toxicology doctors with 1 to 4 years of experience generally have salaries in the range from $41,022 to $98,633 a year.

Toxicologists with the Diplomate of the American Board of Toxicology (DABT) certification generally earn an income in the range from $59,798 to $119,195 a year.

Toxicologists working in the biotechnology research and development industry typically report earning an annual income in the range from $87,891 to $112,305 according to Payscale. Professionals working for organizations that employ between 1 and 9 people generally earn between $52,000 and $90,000 a year.

Toxicologists earn $41.23 per hour on average according to the salary data reported by Jobstat. The highest hourly wage recorded for this profession is $57.14 and the lowest, $25.27 per hour.

Toxicologists’ yearly salaries depend on geographical location among other factors, and can vary significantly from state to state.

Toxicologists typically get a variety of benefits and perks along with their annual income, and their benefits packages can sometimes reflect their salary. Toxicology specialists who get paid vacations and holidays generally earn between $56,111 and $118,783 a year, those who have 401(k) plans are typically paid between $52,426 and $119,599 annually, and professionals who get paid sick leave earn between $55,665 and $116,350 a year according to Payscale’s salary statistics. 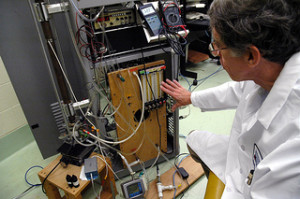 Toxicologists who have life and disability insurance as part of their benefits package are generally paid between $60,000 and $122,084 annually, those who get cell phones typically earn between $78,611 and $114,842 a year, and professionals who get reimbursement for training, education, tuition, or certification generally report salaries in the range from $56,972 to $108,090 a year according to Payscale’s data.

The most popular benefits and perks among toxicologists are paid vacations and holidays, 401(k) plans, paid sick leave, life and disability insurance, casual dress and atmosphere at work, reimbursement for professional education, training, and certification, and cell phones.

Toxicologists’ annual salaries can also vary depending on employer type. Professionals employed by companies generally earn between $53,618 and $128,212 a year, and those working for the federal government are typically paid between $55,432 and $110,466 a year. Toxicologists employed by the state and local government usually report earning salaries in the range from $51,795 to $81,559 a year, and those employed by private practices and firms are typically paid between $52,000 and $90,000 a year according to Payscale.

Academic degree is another factor that can affect a toxicologist’s yearly income. For example, professionals with a bachelor’s degree generally earn between $61,000 and $105,500 annually, while those with a doctorate (PhD) in toxicology are typically paid between $71,500 and $108,057 a year according to Payscale’s salary figures.

Toxicologists’ bonus earnings also greatly depend on industry. Professionals working in the environmental consulting sector typically earn around $9,000 a year, those employed in the pharmaceuticals industry are paid $6,750 a year on average, and toxicology specialists working in the biotechnology research and development sector get $4,500 a year on average in bonus money. Toxicologists working in the health care sector are typically paid around $2,500 a year, and those working in public health research report not getting any bonus earnings according to Payscale.

Women get $3,931 a year on average in bonus money, while men are typically paid around $2,000 a year. Toxicologists with the Diplomate of the American Board of Toxicology (DABT) qualification are generally paid around $3,750 a year.

Employer type is another factor that can affect a toxicologist’s bonus earnings. For example, professionals working for private practices and firms typically get around $5,000 a year, those employed by companies are paid $4,250 a year on average, and toxicologists who work as contractors are generally paid around $4,069 a year in bonuses. Professionals working for the federal government report getting $750 a year on average in bonuses according to Payscale’s salary statistics.