The basic salaries for podiatrists working in the U.S. are generally in the range between $69,717 and $196,527 a year according to Payscale’s data.

The Bureau of Labor Statistics (BLS) reveals that the top paying industries for podiatry doctors are offices of physicians, where these professionals earn $157,590 a year on average, followed by outpatient care centers, where the median salary for this occupation is $142,620 a year, and offices of other health practitioners, where podiatrists earn around $131,980 annually. Professionals working at general medical and surgical hospitals are paid around $112,170 a year, and those employed by the federal executive branch earn an average yearly income of $103,620 according to the BLS.

The starting salaries for podiatrists in their first year on the job are generally in the range from $68,163 to $117,916 a year according to Payscale’s salary figures. These professionals are paid $2,550 a year on average in bonuses. 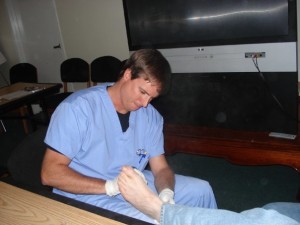 The salary data provided by the Bureau of Labor Statistics (BLS) reveals that the top paying states for podiatry specialists are New Hampshire, where these professionals earn around $186,940 a year, followed by Colorado, where the median annual salary for podiatrists is $182,140, and Maine, where podiatry doctors earn $167,070 a year on average. Podiatrists employed in Indiana are paid around $166,500 a year, and those based in Minnesota earn $163,880 a year on average.

Professionals working in Maryland earn a median annual salary of $142,440, those based in Delaware make around $139,900 a year, and podiatry specialists employed in Ohio are paid $124,260 a year on average. Podiatrists working in New York earn around $122,900 a year, and those based in New Jersey are paid around $119,000 annually. Professionals employed in California make $110,260 a year on average, those working in Florida earn around $148,480 annually, and podiatrists based in Illinois receive an average annual income of $118,410 according to the income data provided by the BLS.

Podiatrists usually get a wide range of benefits along with their annual salary, bonuses, and contributions from profit sharing, and the benefits packages can sometimes reflect their annual earnings. Professionals who get malpractice and liability insurance generally earn between $74,240 and $158,399 a year, those who have 401(k) plans are usually paid between $75,503 and $229,789 annually, and podiatrists who get paid vacations and holidays report earning salaries in the range from $76,753 to $167,675 a year. Podiatrists who get paid sick leave typically earn between $66,977 and $193,916 annually, and those who get reimbursement for training, education, or certification earn an annual pay in the range from $64,564 to $15,374. Professionals who have life and disability insurance as part of their benefits package generally earn between $84,430 and $201,341 a year, and those who get cell phones are typically paid between $48,000 and $175,000 a year according to Payscale’s salary data.

Hospital setting is another factor that can affect a podiatrist’s salary. For example, professionals working at private practices and physicians’ offices generally earn between $68,422 and $214,891 a year, while those employed at general hospitals report annual earnings in the range from $66,977 to $242,395 according to Payscale.