Otolaryngologists working in the United States typically earn salaries in the range from $189,375 to $406,096 a year including bonuses according to the salary information reported by Payscale.

The basic annual salary for otolaryngology doctors is generally in the range between $180,236 and $394,410, and the yearly bonus earnings can amount to up to $49,316 according to Payscale’s data. Otolaryngology specialists working in the health care industry are typically paid an income in the range from $118,500 to $375,000 a year.

Otolaryngologists’ annual salaries depend on a variety of factors, including years of work experience in the field.

Physicians with a certification from the American Board of Otolaryngology are typically paid between $183,020 and $408,514 a year.

Otolaryngologists’ annual salaries also vary depending on the type of employer. Otolaryngology doctors employed at hospitals typically earn between $201,341 and $496,647 a year, those working for private practices and firms are usually paid between $100,671 and $372,485 annually, and professionals employed by universities and colleges generally report earning a yearly income in the range from $76,302 to $304,617 according to Payscale’s salary data. 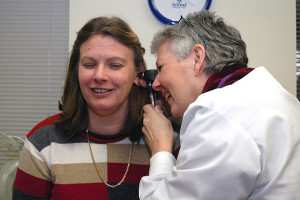 Otolaryngologists working in Montana earn around $189,000 annually, those employed in New Mexico are paid $178,000 a year on average, and professionals working in Arizona earn an average annual pay of $171,000 according to the salary data provided by Indeed.

Physicians employed in Colorado earn $178,000 a year on average, those working in Illinois are paid around $221,000 annually, and professionals working in Massachusetts earn a median yearly wage of $237,000.

Doctors based in Oregon are paid around $190,000 a year, those working in Nevada earn $166,000 a year on average, and physicians based in Florida earn an average annual salary of $189,000 according to Indeed’s salary figures.

Otolaryngology doctors’ annual income also varies from city to city. Physicians employed in New York earn $259,000 a year on average, those based in Los Angeles are paid around $205,000 annually, and professionals working in Chicago earn an average annual income of $226,000 based on the salary data reported by Indeed.

Otolaryngologists working in Phoenix earn around $163,000 a year, those based in Philadelphia and Detroit are paid around $199,000 annually, and professionals employed in Denver earn a median yearly salary of $183,000.

Otolaryngologists working in the U.S. earn $156 per hour on average according to the salary figures reported by HealthcareWorkerSalary.com. 10% of these professionals earn an hourly salary of $204 or more, and the 10% on the lower end of the pay scale are paid $112 per hour or less.

Along with their basic yearly salary and bonus earnings, otolaryngologists typically get a wide range of benefits and perks, and these can sometimes reflect their annual pay.

Otolaryngology specialists who have malpractice and liability insurance as part of their benefits package typically report earning an annual salary in the range from $186,033 to $393,530, and those who have 401(k) plans are usually paid between $102,129 and $385,405 annually. Otolaryngologists who have life and disability insurance generally earn between $52,349 and $400,755 a year, and those who have paid vacations and holidays typically earn an annual income in the range from $52,711 to $399,236.

Physicians who get reimbursement for professional education, training, tuition, or certification generally make between $194,644 and $289,949 a year according to the salary figures reported by Payscale.

The most popular perks and benefits among otolaryngology doctors are malpractice and liability insurance, 401(k), paid vacation, life and disability insurance, paid sick leave, 403(b), and reimbursement for training, education, tuition, and certification.

The annual bonuses can also vary from state to state. For example, otolaryngologists based in New York typically get about $27,500 a year, and those working in Arizona are paid $14,000 annually on average. Doctors employed in Illinois report getting around $2,500 a year in bonuses, and those working in Indiana get $5,000 a year on average according to Payscale’s data.